Aveiro is a municipality of 70,000 inhabitants on the north coast of Portugal. Known for its “Ria” – retreat of the sea that forms canals that meet with the mouth of the Vouga River – architecture and good food, the city is also one of the places with highest rate of bicycle use in Portugal. If you travel around the country and ask anywhere “which one is the city of the bicycles?”, people will certainly answer: Aveiro.

It is in this scenario that Joana Ivonia was born. It was there where she grew up being taken everywhere by her mother inside the bicycle basket. “I regret not having a picture of it, but many people meet me and remember that scene. But everyone did this at the time, took their children in the bicycle basket”.

From the bicycle basket, in her adolescence, Joana began cycling with her friends. “Since I was 12-years-old, we used to go to the beach in groups of 20, 30 people by bicycle”. She believes this comes from her mother and stepfather who always introduced concepts that no one spoke about at that time. “We used to eat organic food. My family was friends with many Dutch people who had ranches in the region and produced organic food. I grew up in a house meeting people from many different places”. 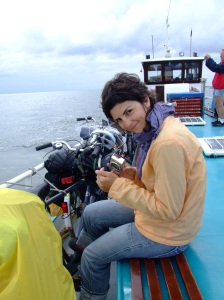 However all the pleasure Joana found in the bicycle was interrupted when she moved to the city of Porto, where she went to a Design graduation and chose not to move around by bicycle. When she returned to Aveiro, she bought a car. “I lived in a ranch and public transport wasn’t good”. But to breathe the air of the bicycle city again, soon convinced her to leave her car at home and ride bicycles again. “I was the only one at work that went by bicycle. People didn’t believe that I left a new car in the garage to ride my bicycle”.

Another stimulus to keep pedaling was the beginning of the relationship with César, now Joana’s husband. “He also liked bicycles. We went to live in Lisbon and took the bicycles with us”. It was in the Portuguese capital where Joana realized how Aveiro was recognized as “the city of the bicycles” in Portugal. “I worked with branding and realized that the bicycle was a mark from Aveiro. But that was no longer true. The city is full of cars, bicycle culture is lost, but there was this mark in my city’s history.”

Passionate about Aveiro, Joana and César returned to the city, where Sebastião was born, who is 4-years-old now. The arrival of the son made Joana rethink her life and feel that her work in the design office, developing branding for companies, wasn’t contributing to anything. “I wanted to make something useful for society”.

Joana quit her job and started attending groups and meetings about cities. She helped to reactivate a group on mobility within the “Aveiro em Transição” (“Aveiro in Transition”) initiative. There she made friends, met people interested in rescuing the history of bicycles in Aveiro, they began to meet and from these meetings Ciclaveiro was born – a group that wants to give visibility to bicycles in Aveiro making campaigns, events and pressure in the local government. This year they are getting officialized as an NGO and they are already a reference in the subject of bicycle mobility throughout the country.

Recently Ciclaveiro was internationally recognized. The European Commission in Brussels invited them to moderate preparatory workshops for the European Mobility Week. The recognition came after a contest that the group organized with Aveiro traders. “We made a shop window contest with the theme ‘Aveiro and the Bicycles’. Participant traders had to decorate their shop windows with bicycles and the winner would get an ad in the local newspaper, which was our partner”. The idea spread through Aveiro, gained visibility, entered the Netherlands best practices on bicycles’ kit and there are other European countries wanting to replicate the initiative.

Joana’s main inspiration is her son Sebastião. She battles every day to build a better city for him and, to do that, she tries to be his greatest example. “This what I do is not about bicycles. We have a garden, we have a vegetable garden, we relate to our neighbors, we take Sebastião to school on a bicycle, and some parents are already doing the same. When you have a child that’s what you want, that he or she can walk, be free and run without danger.”