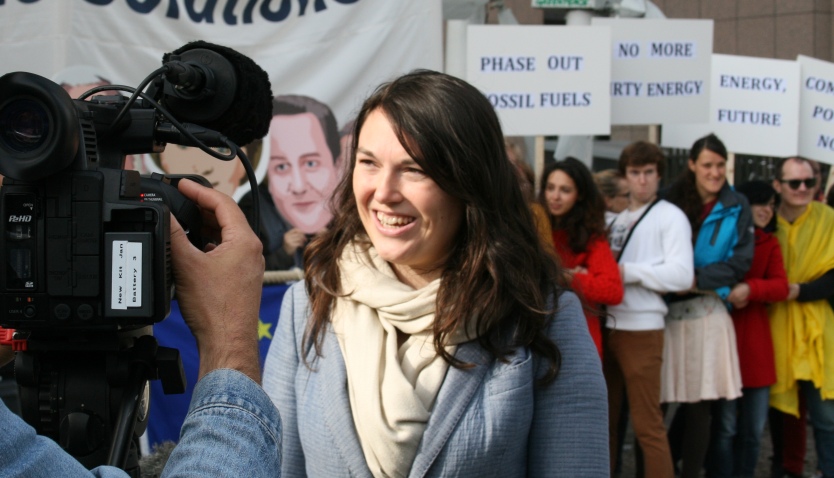 As a child, Molly Walsh told children of her school, excited, in a small community in Ireland, that in her house they ate organic chicken for Christmas. The information that was a source of pride for her, turned into bullying for all her school life. But this is Molly’s root: daughter of a mother that was an activist in the labor union of merchants, and an ambientalist architect father, who spend his life in rural villages to the north of Ireland, and was involved with projects in water and energy. Today she follows the path of her parents: “They are no longer alive, and I wish I could tell them what I do now”.

Molly has a degree in Environmental Biology. It was at the University that she realized that something was happening on the planet. And this “something” was called Climate Change. “I was frustrated how classes didn’t approach the political aspects. They showed Climate Change as a natural phenomenon only. But then I had a class on fossil fuels and realized that this should be the beginning of all disciplines, not the end”.

Touched by the theme, Molly plunged in it and joined the campaign “Shell to Sea”, denouncing the impacts of a gas refinery that Shell company manages in a natural area in Ireland. “It was there I found my sense of belonging. When you come from a small community and have these ideas, you are a stranger. In the climate movement I found myself”.

Further, Molly started an internship in the office of the international NGO “Friends of the Earth”, an organization in which she operates until now. For three years Molly lives in Brussels, Belgium, where she works on a project called “Energy Democracy” working with partners across Europe seeking to change the energy system of the region. “We want to see a democratic transition of energy, that is why we seek solutions to end the use of petroleum and fracking, for example”.

Molly travels a lot for work, and talks to people from different places, cultures and knowledge. However she isn’t content with just this. For almost a decade in Friends of the Earth, she just helped creating an informal feminist space at the office. Despite working with people who want to change the world, Molly ensures that it is difficult to be a woman even in this context. “Sometimes men propose the same thing as you at a meeting, sometimes they come with the sentence ‘she is so young’”. “Energy is a field where is not common to see women working on. It is very technical and women end up behind the scenes”. What Molly wants to see is more women involved in these projects. For this she wants to make her coworkers great allies.

“Even in the environmental movement we have to fight against patriarchy”. But Molly celebrates that this action also served to strengthen and bring together the women in her workplace. “We created a care space, a space where we have the right to be angry, but also the right to laugh. And this is my world. A world of care, love and anger”.